What can we learn from Aristotle about social media? 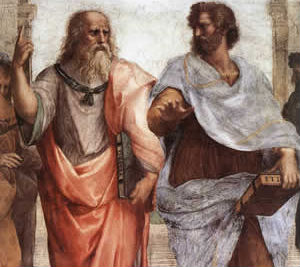 Of course Aristotle isn’t around to tell us exactly what he might think of the ways in which we use sites and services like Twitter, Facebook, Linkedin or even email, but there is something vital in his Poetics that we would do well to recall even as we write stuff that seems too quick or too evanescent to be informed by his philosophy.

Finding the Whole in Drama and a Tweet
For Aristotle, drama, in particular Tragedy, which he regarded as its highest form of expression, can affect an audience profoundly, not just because of the subject matter, but because of its ability to be complete. Aristotle writes, “Tragedy is an imitation of an action that is complete, and whole, and of a certain magnitude; for there may be a whole that is wanting in magnitude.” It’s this wholeness that often eludes us when writing the quips that become a 140 character message in Twitter, or the initial, longer exchange of Facebook or Linknedin.

What is essential about this wholeness, and it’s something that’s often lost or just not considered when writing a Tweet, a Facebook post or an email subject line, is what makes up this wholeness, namely: the beginning, middle and the end.

Here’s what Aristotle tells us about these three parts of a Tragedy/drama:

How to Structure a Tweet or Social Media Message
Take a moment to reread that passage and consider how it applies to something as simple as a Tweet. When you’re writing a Tweet – be it for yourself or your client – you should consider these same three parts. Your Tweet should be informed by a beginning – by which I mean that which precedes and informs the words in your Tweet. You have a limited number of characters, even if you use a service like TweetDeck to go beyond the 140 character limit, and you have to use that space wisely, not just to point up what you want the readers to know they might find by following a link in your Tweet, but in order to give them a sense of where you (or your clients) come from – and what informs the Tweet in the first place.

The Stuff in the Middle
The middle, or “that which follows something as some other thing follows it” is essentially the stuff of your Tweet. The middle is your opportunity to grab the attention of your reader, and to let your reader know that there is more to that Tweet than just the words contained in its limited space. The Middle – by which I mean the Tweet itself – must convey the beginning, while also hinting at the End. The End could then be what the reader will find by clicking on a link and going to your website, blog or special offer.

Putting Aristotle to Work in Social Media
So many of the Tweets I read online are focused only on the End – the stuff they want to sell – and fail to introduce a sense of where the Tweet begins – or why I should entrust my simple click to this particular Twitterer. It sounds absurd, and to an extent it is, but every Tweet, every post on Facebook, or Email subject line we write for our clients should have a beginning, middle and an end – at least in the the process of constructing that post and coming up with the right words.

By crafting a 140 character note that is consistent with a company or client’s brand, we write Tweets that must then capture that brand, and convey to the reader a reason for them to trust us to lead them toward a consistent end that further relates to their interests – interests that first aligned them with our clients and first encouraged them to Like, Follow, sign-up for or Join their social network.